Homebuying isn’t just for couples — a subset of single homebuyers continues to grow across the U.S. and they are competitive players in the current housing market. Millions of singles are out there and they, too, want a piece of the American Dream — homeownership.

Realtor.com reports that in 1960, one-person households made up 13 percent of U.S. households; by 2017 that figure rose to 27.9 percent (the actual number of singles is much higher, since these figures don’t include single parents with children). In November, RE/MAX analyzed data from the RE/MAX National Housing Report, along with the share of mortgages taken out by singles according to mortgage processor Ellie Mae, to rank the top five U.S. cities for singles looking to buy a home. 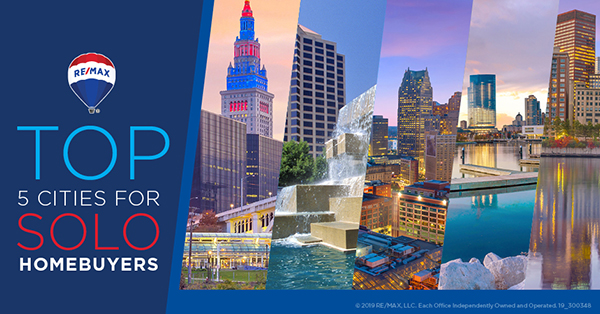 
With a median sales price well below the RE/MAX National Housing Report average of $235,000 (November 2018), nearly half of all recent mortgages in The Rock & Roll Capital of the World belong to singles. Cleveland boasts many of the Midwest’s most visited attractions, including the Rock & Roll Hall of Fame, Pro Football Hall of Fame, the “A Christmas Story” home, Cedar Point Amusement Park and the Cleveland Museum of Art.


Albuquerque is known for authentic art, hot air ballooning, vibrant traditions and as a popular spot for homes purchased by the unhitched. Ellie Mae reported in 2018 that more than 50 percent of recent mortgages in the city were taken out by singles. Visit Albuquerque says whether you’re taking a scenic hot air balloon flight over the city, playing a round at one of their award-winning golf courses, mountain biking in the Sandia foothills, hiking through history, kayaking the waters of the legendary Rio Grande or strolling through Old Town, you’ll find Albuquerque offers a real breath of fresh air.


Detroit is America’s comeback city and single homebuyers are part of the reason for the area’s resurgence. With a median sales price of $180,000 (November 2018), more than $50,000 less than the November 2018 RE/MAX National Housing Report average for the same month, nearly half of all homes in the Motor City are being snatched up by singles. Metro-Detroit covers nearly 2,000 square miles and offers so much to see and do. From the Motown Museum to the Detroit Opera House, the Charles H. Wright Museum of African American History to the Michigan Science Center, Motor City has a lot of offer.


“Schlemiel! Schlimazel! Hasenpfeffer Incorporated!” Laverne and Shirley loved living in Milwaukee and so do a lot of bachelors and bachelorettes. Nearly 45 percent of homes purchased recently were bought by singles, putting down roots and achieving the American dream of owning their own home. Milwaukee is known as the “big city of little neighborhoods” because of its unique areas and one-of-a-kind charm. The Milwaukee Art Museum, Harley-Davidson Museum and Summerfest, promoting itself as “The World’s Largest Music Festival,” are just a few of the city’s most popular destinations.


Well-paying tech jobs from corporations like Amazon and Uber, among others, are bringing singletons from all corners of the country to Pittsburgh. With a median sales price of more than $70,000 under the RE/MAX National Housing Report average of $235,000 (November 2018), unmarried millennials are gobbling up homes in the city’s charming historic districts. Pittsburgh is famous for its Gilded Age sites including the Carnegie Museum of Natural History, the Carnegie Museum of Art and the Phipps Conservatory and Botanical Gardens. And don’t forget The Andy Warhol Museum — home to the largest collection of Warhol art and archives in the world, and the breathtaking Duquesne Incline.

Whatever your relationship status is, I’d be happy to help you find a home you’ll fall in love with. Contact me today!
Previous
Organize your business Next
3 Tips for Tackling Spring Cleaning

Thank you for contacting us, we'll get back to you shortly.

Sorry, we are unable to send your message at the moment. Please try again later.